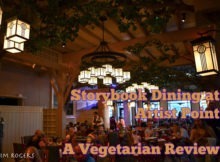 Disney Merchandise
Disney mementos can take many forms, but around the holiday season some of my favorites are the Disney Christmas ornaments. Whether they were from the parks, received as a gift, or
Read More