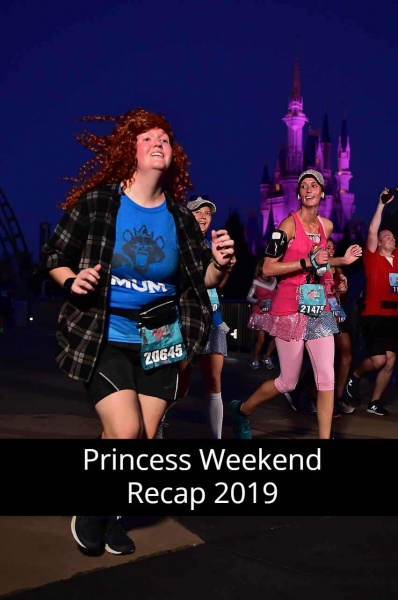 runDisney’s Princess weekend 2019 is when mostly Princesses, but a few Princes descend on Walt Disney World.  With the 5k on Friday, the 10k on Saturday, and the half marathon on Sunday, there is a distance for all.  While I did not run the 5k, I was one of those after the Fairy Tale Challenge medal which is earned by registering for the Challenge which is compromised of the 10k and Half Marathon.

As every race weekend does, runDisney’s Princess Weekend 2019 started at the Expo.  My one complaint about the weekend was having bib pickup in a separate building from shirts.  If both could be picked up in the same building, it would have been much more convenient for runners.  The Expo actually takes three buildings- one for bib pickup, one for vendors and shirts, and a third with all the runDisney race merchandise.

One pro tip for those who want to go resort to resort- or to the parks, you can easily take the race transportation to the expo, pickup your items, and then take a different bus to a different resort.  While you can’t go directly to a park, you can take bus to a resort that is close to each of the parks.  I utilized race transportation to the Polynesian and was then able to take the monorail directly to Magic Kingdom.  If you’re not sure which bus to take, ask one of the transportation personnel.  They can often direct you and tell you which bus will provide the fastest trip.

The 10k was a great race; the temperatures were just about perfect before the sun came up.  And the various characters on course were fantastic.  One of the major differences this weekend compared to other race weekends is the number of face characters on the course.  This leads to some unique interactions as the characters could speak – and comment on costumes.

As it was my actual birthday on the day of the race, I wore a Birthday Button- and got lots of comments from characters about my button, wishing me a Happy Birthday.

The day of the Half Marathon started off hot and humid.  runDisney did a great job of telling runners to take precautions, putting extra water stops on course, and adding a wet sponge stop just after the mile 10 marker and making ice available to runners as the temperatures increased.

One opportunity that runDisney races offer is the option to run in costume.  In fact, more people run in costume, or at least a Disney theme of some sort than not.  I was luckily enough to be part of a costume group that took on the casual Disney Princesses from Ralph Breaks the Internet.  I’m not sure that I would run a half marathon in wig again, but it did make for some great photos and positive comments from the Princesses and other runners on course.

As usual, they also did a fantastic job of having lots of characters out on course.  Some of my favorites included the pre-finish line characters of Mickey and gang, a Castle photo, and all the Princes in one photo.

Overall, runDisney’s Princess Weekend was a great success and offered a unique experience that you can’t find anywhere else but at Walt Disney World.

Did you participate in runDisney’s Princess Weekend this year? What were your thoughts of the event? Share what you enjoy about it in the comments below or on Facebook or Twitter!

Want to visit run a runDisney race? Contact The Magic for Less Travel for more information and a free, no-obligation quote.