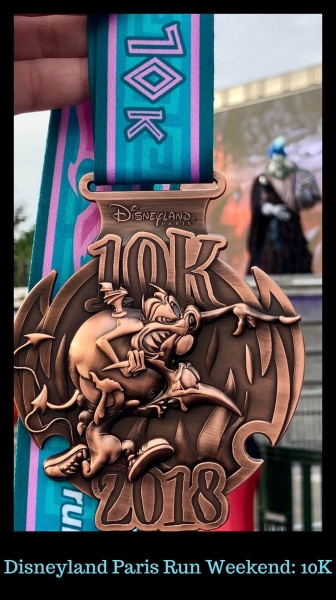 On Saturday, September 22, 2018, I continued my quest for the Disneyland Paris 36K Challenge medal. The night before, I had completed the first part of the challenge by running the 5K race. After less than 4 hours of sleep, I was ready to run the next race. The 10K! I was excited for this one because not only is a 10K my favorite distance to run, but this one had a fun, villain sidekicks theme!

Of course I had to dress for the occasion! Since my friend/running partner Lisa was dressing in Ursula attire, I chose to dress as the Sea Witch’s sneaky sidekicks, Flotsam and Jetsam. In case you haven’t already guessed, Flotsam and Jetsam outfits are hard to come by. Luckily, I have a very talented and creative mom who crocheted 2 eels for me. She didn’t even have a pattern. Thanks, Mom!

After attaching the eels to my custom-made seaweed shirt with an absurd amount of safety pins, I was dressed and ready run! Once again, we left our hotel room 40-45 minutes prior to the start of the race to wait in our corral. We were in corral D for all 3 races since we were running the 36K Challenge.

Off to a Great Start

The temperature for the race was just about perfect. A little chilly at the start, but I knew that once we started moving, I would be warm. Pain and Panic from Hercules were the main characters for this race. They took their places on the stage at the starting line, ready to send the runners on their way. This race also started right on time and within 15 minutes, we were in position to start. Just as the sun was coming up, we took off!

The race route took us through the parks once again and the views were beautiful with the sun rising. We hadn’t made it over to Discoveryland the day before, so I got my first glimpse of the Jules Verne themed architecture. Amazing!

Character appearances stuck to the villain sidekick theme throughout the race. By the time we made it to Fantasyland, the Cheshire Cat was greeting fans in front of Alice’s Curious Labyrinth. I loved that most of the characters had very fitting backdrops. The line was quite long, so we snapped some quick selfies and continued on our way.

Soon, we ran through the castle, which is always the highlight of any race. PhotoPass photographers were in place just off the course for runners to pose in front of the castle. These lines were very short since there were multiple photographers, so we weren’t passing this stop up!

The route also took us through Frontierland and Adventureland. Prior to the race, I found a Twitter account that posted photos of the characters at the races so we could check to see which characters were coming up. We took a quick look and discovered that Flotsam and Jetsam were up ahead! I couldn’t believe it! We picked up the pace because we certainly weren’t missing them.

We found the eels near the Pirates of the Caribbean, tucked into a cavern at Pirate’s Beach. Flotsam and Jetsam LOVED my outfit and meeting them was the highlight of my race.

We found one more truly unique character as we neared the end of the course in the Studios Park. In the same area where we met Thor at the 5K, Goob (AKA the Bowler Hat Guy) was greeting and posing with runners. Confession: I hadn’t seen Meet the Robinsons before this race and didn’t know who this was. Lisa was super excited to meet him though since this is one of her favorite Disney movies and I never turn down an opportunity to meet a rare character. We ended up with a great photo, and of course, I watched Meet the Robinsons as soon as I got home.

Coming Up on the Finish Line

Since the finish line for all 3 races was in the same place, we knew we were coming up on the end of the 10K and the excitement was building. We took up a steady pace and headed for the finish line where Hades was waiting for all of the successful runners.

We had survived the pain and panic of the 10K race and were rewarded with a medal featuring the Pain and Panic characters. I posed for a few photos before grabbing some water (we didn’t miss it this time), a banana, and a snack box.

Photographers were waiting to take 10K finisher photos in front of the Studios Park.

Since we were already here, we went straight into the park to grab breakfast. This was convenient since breakfast at the Studios was included with our meal plan. Although it wasn’t the best breakfast sandwich I have ever had, it sure tasted like the breakfast of champions. We were starving! I even opted for the chocolate croissant, figuring that I had earned it.

The parks were very crowded!  We decided to take it easy by only riding a few rides and then heading back to the hotel to swim in the indoor pool. We finished out our day with an early dinner at Walt’s and another viewing of Illuminations. I think all of this was smart, considering that we had one more race in the morning and it was a big one. I’ll be back soon to all you all about the main event: the Disneyland Paris Val d’Europe Half Marathon!

Have you run a Disney 10K race or challenge?  Let us know what you enjoyed most in the comments or on Facebook or Twitter.!