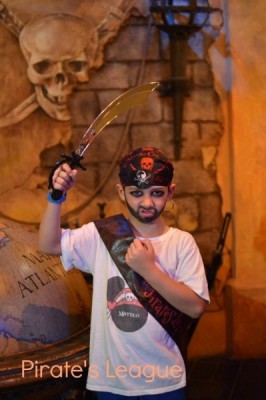 On our last trip, we decided to check out the Pirate’s League. It is located in Adventureland and offers several packages for your pirate or mermaid. We have never done Bibbidi Bobbidi Boutique and we felt like this was a great alternative because there was something fun for everyone, not just the princesses. Besides, my girl is more of a mermaid than a princess! It’s also relatively cheaper than the Bibbidi Bobbidi Boutique, and from an availability standpoint, you don’t have to call right at the 180 day mark. Although you don’t have to call right away, I would suggest not waiting too long because this seems to be becoming a more popular option.

From a planning standpoint, I would also recommend that if you have any plans on attending the Pirates and Pals Fireworks Cruise, this would be a great day to plan on doing both, since you’ll be in full blown pirate attire. Alternatively, if you’re going in the fall, you could do this on a Halloween party day and you have your costume all ready to go for the night. 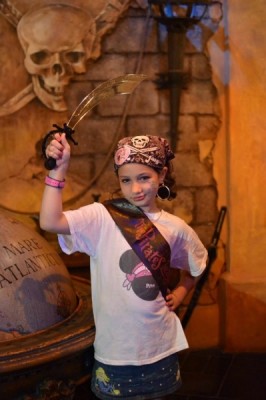 The whole process was quite neat. Everyone is in character, so you’re surrounded by ‘ye mates. We did not wait long at all, as we had an appointment. We came into the staging area and the kids each were instructed to spin around a chest. This is how their Pirate name is chosen. From there, they are each called into a station to get their make-up done. The boys had several options and due to the heat, the attendant recommended which ones would be best. My daughter ended up doing the Mermaid package, which included gem tattoos, lip gloss and nail polish that she got to keep.

The PhotoPass picture and the take home bag of goodies are so fun. You get a bandanna, a sword, a Pirate’s League sash, an eye patch and a Pirate scroll with your pirate name on it. You would easily spend the same amount of money on all of those souvenirs in the Pirates of the Caribbean gift shop, but with the Pirate’s League, you are getting a whole makeover as well!

After you are done with your makeover in the chair and after you take your Pirate oath, you will be taken into a separate themed room where they take several poses of you in character. These are some of the cutest pics from our vacation. If you have time after your session, I would also recommend taking part in the Captain Jack Pirate Tutorial in Adventureland, where you might get picked to participate in the Pirate Tutorial; this is even better if you already have the gear! 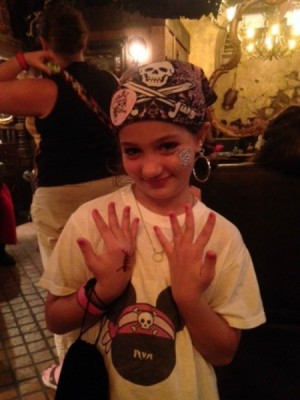 Have you ever participated in the Pirate’s League? What were your thoughts? Share in the comments section!