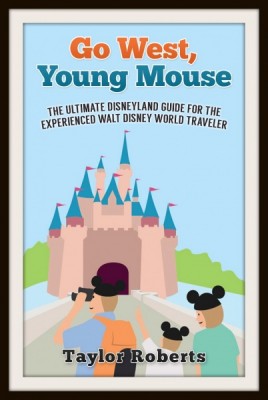 So, you’ve been to Walt Disney World so much you don’t need a map, you think you know everything there is about going to a Disney park. You decide now is the time to go to California to see Walt’s original park, Disneyland. I’ve heard it’s roughly the same, so no need to do any research. This is where you go wrong. Even though Disneyland and Walt Disney World are very similar, they’re also very different. Taylor Roberts has written the perfect book for the Walt Disney World experts that are on their way to Disneyland and he’s done a great job!

I recently read this e-book and actually found out things I didn’t know, even though I have been to Disneyland several times, but he’s added in a lot of little tidbits that will make my next trip even better. This was written prior to the start of the 60th birthday celebration so there will be a few things that aren’t addressed, but I think you’ll find this money well spent so your trip to Disneyland will be an even better experience.

The book is broken down in very easy chapters, starting with some history on Disneyland, which although most people know the history of Disneyland, I think you’ll find some information you may not have known. No matter, it’s always fun to read. The book then will go through the resorts and where to stay, tickets and FastPass.

There is in-depth chapters on both theme parks, which are broken down into the lands in each. This is a great way to see all of the attractions and help plan your stay. If you’re traveling with young children it will also help planning what they will enjoy.

All Disney fans love food, so there is a chapter on dining at the parks, resorts and Downtown Disney. Disneyland has a few unique foods that you can only find there—find out just where they are so you don’t miss out on these treats!

California, like Florida, also offers a lot more to do than just Disneyland. Unlike Florida, though, they encourage you to visit the other attractions, and many of these can be added to your Disneyland package. Taylor explores the many other things to do during your stay in California, and you’ll find you need much more than just a few days!

Going to Sharing is caring!