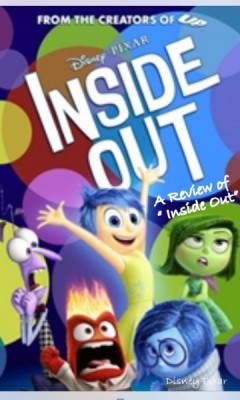 I usually don’t go to opening night of a movie, but in the case of a Disney-Pixar movies I always make an exception and this past Friday night was no different. My 11 year old son and I attended a showing of Inside Out. The movie is 142 minutes long and written by Pete Docter who also directed it with Meg LeFauve and Josh Cooley.

The movie starts out with a short film called “Lava” that simply stole my heart. It is a short film about a volcano hoping to find his true love. It was adorable and touching in true Disney-Pixar style. I think I might have shed a few tears of lava myself. On with the main event. (If you want to avoid all spoilers, stop reading….now.)

Inside Out is about a little girl named Riley, who lives in the Midwest. As soon as she is born, so are her emotions and her personality begins to develop. Riley’s emotions are all so different. Joy, an exuberant and happy pixie of a girl. Joy is also the leader of the pack at Headquarters who insists Riley’s life be filled with happiness from dawn to dusk. Sadness, a glass half empty mush, who can never truly find her place on the emotional team due to her teammates insisting she stay in the background. Fear is a tall, slender guy who is afraid of his own shadow. Anger, who is a short firecracker ready to explode at a moment’s notice and last of all Disgust who is similar to most 15/16 year olds, snarky and full of attitude.

As days go on and memories are developed the team stores them in Riley’s Core Memory Bank. These core memories also help to create the Islands of Personality that make Riley, Riley. Her memories have created the islands of honesty, family, hockey (her beloved sport), friendship and goofy. As Riley develops one of these memories the islands grow and prosper.

Just as Riley’s life is sailing along smoothly, she and her family must move to San Francisco due to her father’s job. Joy has been in charge of most of Riley’s emotions during her life allowing her to live as a happy and content child. Now it seems that Sadness is starting to prevail. New school, trying to make new friends, a moving truck that seems to coming from Mars and a home that is in serious need of a few coats of paint. From the beginning of the move nothing is as it should be and Riley’s emotions are in a mass of confusion on how to handle the situation.

Sadness is slightly out of place with the rest of the gang and even though she tries to help the team with Riley’s emotions, the slightest touch of a core memory ball can turn a happy memory to a sad one, or so it seems. This is where the trouble begins.

During one of Sadness’ times of helpfulness, the core memories are let loose and in an attempt to rescue them Joy and Sadness both get swept away and are deposited in Riley’s Core Memory Storage Bank. They are no longer at Headquarters and that leaves Disgust, Anger and Fear in charge of handling things till Joy finds her way back. These are not the perfect companions in a 12 year old girl’s head and Riley goes from being a happy go lucky, outgoing girl to a moody, cranky, introverted adolescent.

As Joy and Sadness race to get back to Headquarters, Riley proceeds to make bad decisions leading to the breakdown of the Islands of Emotion. One by one the islands dissolve as Riley gives up on hockey, shuns family and commits a dishonest act.

As Joy struggles to get back to Headquarters and make things right she and Sadness encounter the many other areas of Riley’s brain. Her Storage Banks where memories are kept, the Thought Train, her invisible childhood friend Bing Bong and the Dump. The Dump is where old useless memories go and no one wants to go there.

As with all good Disney-Pixar movies happy(ish) endings are inevitable and this movie is no different. I hate to give out spoilers, but be assured Riley’s emotions get it together and get this girl back on track. The movie also teaches us, the viewer, that Joy and Sadness can be an incredibly strong team in life and even though they are totally different emotions they are there for each other.

The use of color is prevalent. The movie is a feast for the eyes as color pops at every corner. Even the characters are in colors that one would identify with; Joy is yellow, Sadness is blue, Disgust is green, Anger is red. In my opinion, the movie gets a little sluggish toward the middle, but the feel good message prevails and perhaps answers the question in so many of our minds when we look at our children, “What was he/she thinking?”

Have you seen Inside Out yet? What did you think?