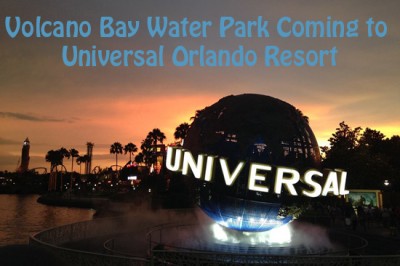 Universal is billing this water playground as its third theme park taking its place right next to Universal Studios Florida and Islands of Adventure, and rightfully so, because they claim that the new addition is going to re-imagine what it means to be a water park.

The park’s theme will be set against a postcard-perfect tropical getaway formed by a massive volcano – and it will have something that every member of the family will enjoy. It will feature innovate and thrilling attractions, peaceful areas for relaxation and be a totally immersive environment.

While no further details have been given about the different attractions that will be a part of the themed water playland, from the concept art, there appears to be a large wave pool, tube slides, what I am assuming is a drop slide (where the floor drops from beneath you, kind of like the AquaDunk), a water spouting volcano, beaches, observation areas, and more.

Universal’s Volcano Bay will be located within Universal Orlando Resort, just south of the Cabana Bay Beach Resort. Ground has already been broken on this project and work is already underway on this unique experience.  Additional details will be released in the future.

Are you excited about this new announcement of Volcano Bay Water Park?