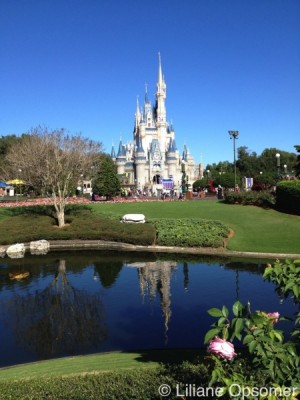 The Magic Kingdom has plenty of Kodak moments but it is also one of the most difficult parks to photograph. The biggest problem is that the park is crowded shortly after it opens. I usually arrive 30 minutes prior to opening and move to whatever area I want to shoot as soon as the rope drops. This of course, requires repeat visits in order to cover all the areas I want to photograph.

Crowds are not the only problem; as of late, cranes and fences such as those erected for months during the ongoing constructions for the New Fantasyland were a major headache. There are times when I thought that I had an all clear only to discover that yet another “tall bird” is lurking just around the corner. Talking about birds, the latest “birds” to invade my view are selfie sticks. With so many obstacles, worrying about the weather has become secondary!

However when all stars are aligned, it is immensely rewarding to walk through the park and shoot away. Here are some of my favorite pictures:

Cinderella’s Castle is of course a must and the new hub is a big improvement as it opens the space up for some real good picture taking. One has to be fast though and make sure to get there before it is crowded. At times the lawn is dotted with exhausted guests taking a nap. Give the new hub a chance though. Walk towards Crystal Palace for a different angle. It is a pretty amazing view and the restaurant looks more like a botanical garden. 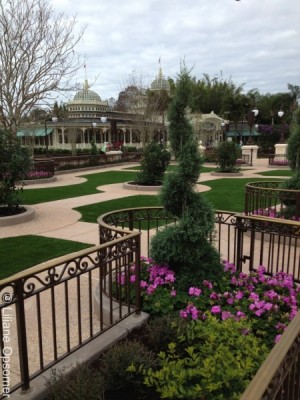 I once was lucky enough to be near the castle when Cinderella walked from the Rose Garden to the castle. Needless to say that it was a very treasured – none scheduled appearance and a matter of being in the right place at the right moment. 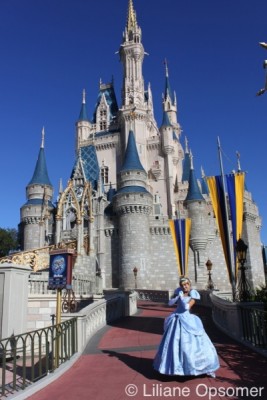 The statue of Walt Disney holding Mickey’s hand is iconic but don’t forget to give the castle a look from a different angle too. 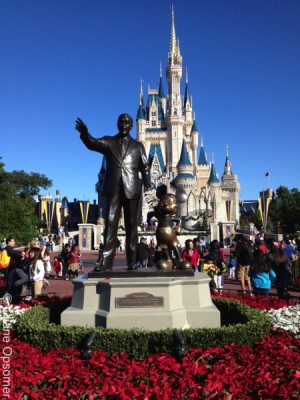 I love taking pictures from the bridge that leads from Main Street to Liberty Square and from the walkway to Tomorrowland. 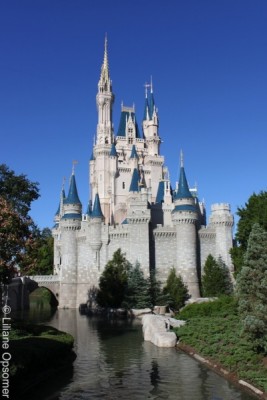 The castle of the Beast – all the way in the back of New Fantasyland, is really great, but you will need quite a zoom for this one. While you can eat at the castle (Be Our Guest Restaurant) there is unfortunately no area to visit and to get a closer look at the towers. 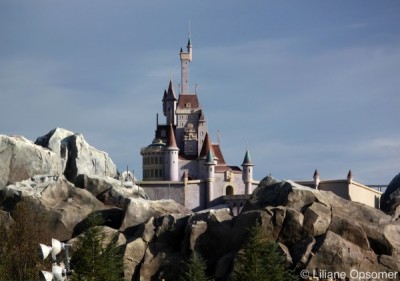 Prince Eric’s Castle is nice during the day but I like it best at sunset, or even at night. 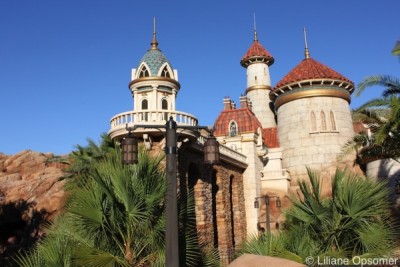 Rapunzel’s Tower, even though just a fancy bathroom, is pretty cool and well worth a picture. 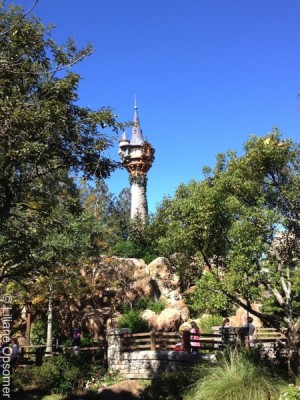 The cottage of Belle’s father Maurice is especially lovely from the side that is away from the queuing area. 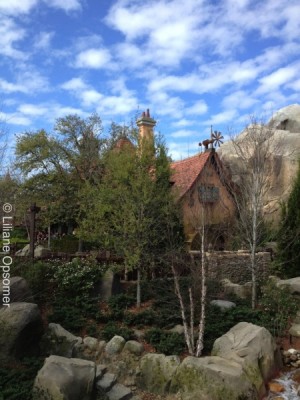 The cottage of the Seven Dwarfs is a great photo op and I am hoping against all odds that one day Snow White will be coming out of the cottage just for me. 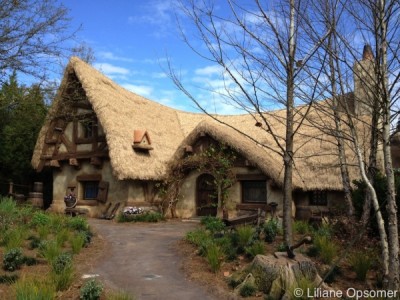 For a great shot of the Seven Dwarfs Mine Train go around the attraction, away from the entrance. There are some real great places to wait for the roller coaster to come by with Cinderella’s castle in the background. 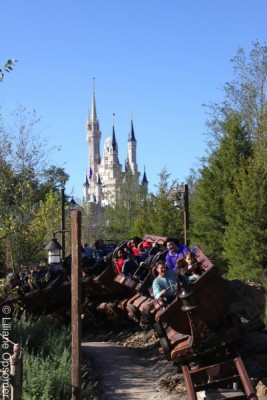 If you love the train, one way to get a good view and a great shot is to wait for the train to come parallel to the walkway leading from Goofy’s Barnstormer towards Tomorrowland. The train at this point is leaving Fantasyland Station and moves slowly out of the station, a perfect setting for a great picture. 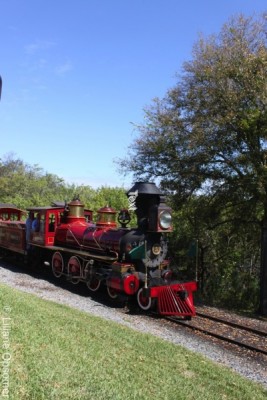 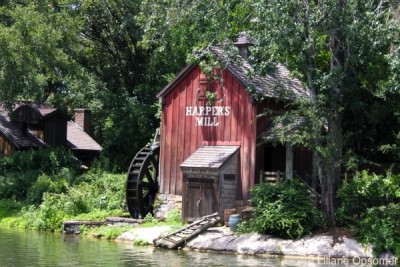 For a neat picture of Space Mountain you will actually have to be outside of the park, walking from the Magic Kingdom towards the Contemporary Resort. 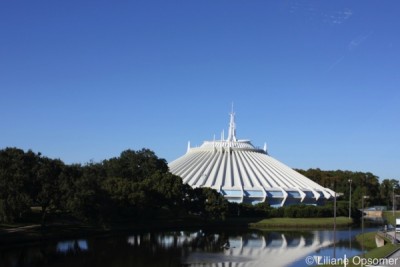 The daily afternoon Disney Festival of Fantasy Parade is another one of my obsessions. The most important part is to find a spot where the light is right and where nobody is in front of you. Over the years believe it or not I have found that one of the best places is a spot in front of a garbage bin just as the parade leaves the central hub.

First the spot is rarely claimed till about 20 minutes prior to the start of the parade, next nobody is allowed to sit or stand in front of a garbage bin and last but not least it helps to be able to steady myself for the perfect shot. OK, it is maybe not the most coveted of all places but it sure works for me. 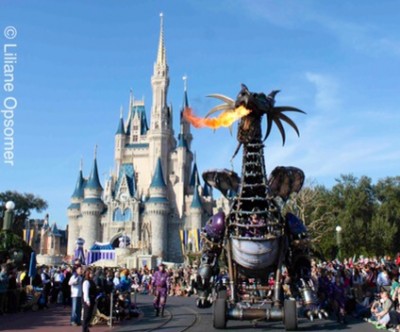 My favorite float is the steampunk dragon and the cast members in their colorful costumes. Another good spot for shooting the parade is of course the terrace of the Main Street Train Station. 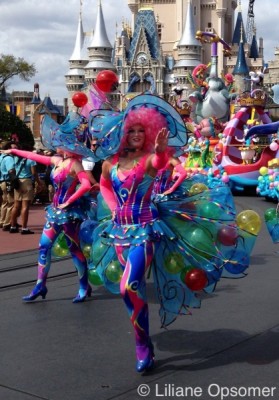 The Haunted Mansion is especially great to photograph during Halloween. 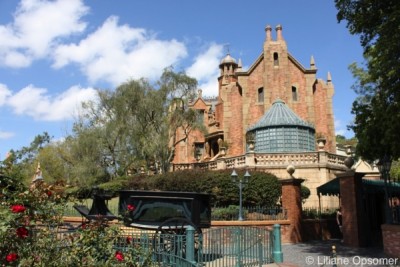 Last but not least there is always that iconic picture in front of the entrance to the Magic Kingdom. It is the classic ‘must shoot’ and looks real nice at night. 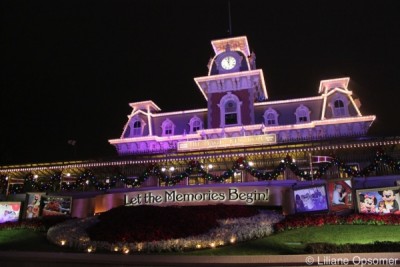 There are many special places in all the parks and depending the season some are more interesting than others. One picture however is always just fabulous and it does not matter if it is the fairy godmother or Elsa who created the look. You know what I am talking about.  The twinkling lights covering Cinderella’s castle at Christmas are simply magnificent! 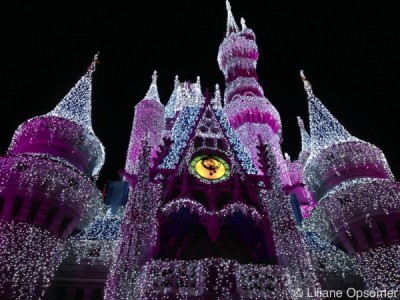 We’d love to hear from you. Tell us: what is your favorite spots for taking pictures at the Magic Kingdom?