My DD turned 4 last November. She loves to dress up, especially in Disney wear. This is not something she saves for just Halloween but it is an everyday experience. Over the summer, when school was out, I never knew whom I would be taking out with me. It could be Minnie Mouse, Cinderella, or possibly Ariel. Last year for Christmas, she asked for a red wig so she could look more like Ariel. 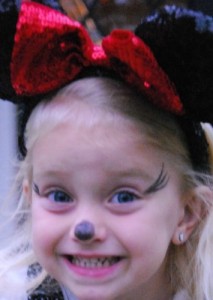 When I asked her what kind of birthday party she wanted, she immediately replied, a pink Minnie party. I began looking on the internet, Pinterest, and to Disney pictures for inspiration. One of her favorite shows is Mickey Mouse Clubhouse so that was my main source. And, since we watch it daily, it was not difficult to be inspired. 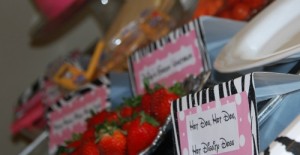 My DD wanted to play a Minnie game. So, I came up with pin the bow on Minnie. Again, I went back to the inspiring Minnie’s Bow-tique. This was an easy game that the children enjoyed. We just had them close their eyes, instead of blind folding them. We marked my daughter’s bow with her initials.

The cake was a homemade vanilla bean with vanilla frosting dyed bright pink, to match the theme. I decided to go with a simple decoration and did a melted chocolate Minnie head. 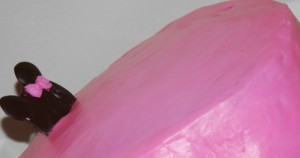 I pulled this together in about one and a half weeks. Once I decided on the theme, I went to Michael’s and bought the supplies. I saved all the supplies, just in case she would decide on the same theme next year. It was a fun and whimsical party, for everyone involved. Have you ever thrown a Disney themed birthday party? I would love to hear your ideas, especially since I have two birthday parties to plan in the next 6 weeks.