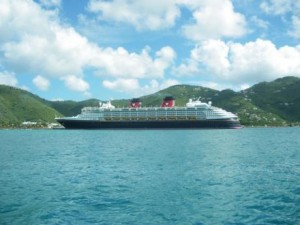 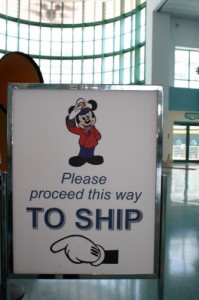 The first time I was onboard was also my first time on a cruise of any sort.    It was 2005, and we were traveling with my mother, my husband, me, our three children and our oldest daughter’s boyfriend.   We also had a large group of Mouse for Less members on this  cruise, and we had so much fun planning the cruise together in chat rooms and email, that I wasn’t sure how the cruise could live up to all our fun.   But it did.     We were booked in two of the “secret porthole” rooms that are on the classic ships.  They are category 9 cabins, sold as a category 10 because the porthole is somewhat obstructed.   There are three of them on each side, 5020, 5022, 5024, and 5520, 5522 and 5524.    These are only on the Magic and the Wonder (the classic Disney ships).    I loved everything about the ship, and our Mouse for Less group, and as often happens on a cruise, we made some lifetime friends.    Some may have thought this was a “bad” cruise as we missed not one but two ports of call, one of them being Castaway Cay, due to high winds.    While we couldn’t dock at Castaway Cay, the captain was able to take the boat to find us some sunshine.    That was a nice option, if you don’t like the weather, move the ship!

After that cruise I was hooked.    We did another group on Royal Caribbean’s Freedom of the Seas, and then a couple of shorter cruises on the Disney Wonder and the Disney Dream.    Our next experience on the Magic was another group of Mouse for Lesser.    We did an eastern itinerary and had a great time.    This was our first time participating in a Fish Extender Exchange (which would require a blog all of its own), as well one family in our group had upgraded to the Walt E. Disney Suite and invited us all over for an afternoon.   Then, an incredible opportunity fell into my lap.    A 14 night transatlantic cruise on the Disney Magic.    I would say, while I loved the Magic before, after spending all those wonderful glorious days at sea really sealed our relationship.

So with the newer ships out, you might wonder what it is I love about the Magic aside from my list of “firsts” that involve the Magic.   First off the size, the size is just perfect to me, I didn’t feel like I was trekking miles to get anywhere, but also never felt crowded onboard or during disembarkation in the ports of call or worse yet at customs when our time ended.   The layout to me flows better than the newer Disney ships, and things like the kids clubs were located in a better location.  On the Magic and Wonder, the kids club check in areas are on deck 5, but in the middle of the ship, up from the atrium area.    On the Dream and the Fantasy, they  are located in the hallway heading towards the aft part of the ship, and inevitably, our cabin on the Dream.    There was a bottleneck in front of the kids clubs pretty much every time I forgot to go up or down before heading forward.

I love the variety of lounges on the Magic.   The promenade is in such a great location to catch people’s attention when they are walking past, to draw them in for a drink, a game of trivia or some evening music.

My overall favorite however is currently on the chopping block.    The upcoming rehab on the Magic will be eliminating my beloved “Diversions”.    Diversions is located in the adult club area, however during the day children are welcome, and there is often family games going on there from giant Jenga to Family Feud.    Appetizers are put out in the late afternoon, and while I do wish they would get a bit more creative with the appetizers, it was nice to know they were available.    (typically it was hot dogs, nachos, veggies and dip).   There were  times I was beginning to feel like Norm from cheers, as soon as I sat down, the wonderful waiter would be heading over with an icy cold Stella Artois or Amstel Lite for me.    (no they didn’t actually all say “MIC” when I walked in, but they wanted to, I could just feel it).    If your timing was off for a scheduled activity, or it was 3am, there were board games you could play, as well as chess, checkers and decks of cards.     As you may have guessed, I really enjoy playing games, and it is not something we make the time for as much in our regular busy lives.    While I imagine they will continue with the games in the updated Pub coming out on the Magic, the only way to find out IF it I will like it as much as Diversions would be to take another cruise.

I am also a regular at my dining time, the only thing I will miss it for is Palo!    We have met some wonderful (and yes still in contact) friends dining on Disney.    Here is the group from my east bound transatlantic cruise with our incredible wait staff 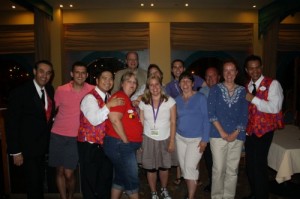 I also like to take in a movie either on the jumbotron screen above the pool or in the theatre, or make flubber at midnight!

More fun cannot be had anywhere!

You can find out more about the Magic and the re-imagination of the Magic at https://www.themouseforless.com/disney-cruise-line/magic-ship-facts/.