I have a new favorite from the world of Disney! No, it’s not an exciting amusement park ride, a cleverly themed restaurant, or a mesmerizing fireworks show. In fact, this favorite resides in my very own living room. My latest preferred form of Disney amusement (if I cannot be at the parks) is Wii’s Just Dance Disney Party.

I received this Wii game for Christmas, put it in the console, and unintentionally exercised for thirty minutes on Christmas day – in my pjs – all in the name of Disney fun! Twenty-five songs include Disney classics that initially appeal to the older generation (like me!), as well as Disney Channel songs that attract the younger, hipper crowd.

Initially, my top choices included classics like “The Bare Necessities” and “Bibbidi-Bobbidi-Boo”. Being most comfortable with these songs, I assumed their dances would be less intense with simpler moves – in other words, more manageable for a mom like me who is all too quickly approaching her 40s!

When my sons decided to get in on the fun, they convinced me to try the Disney Channel songs as well. While the classic songs have more Broadway or ballet style moves, the Disney Channel songs have more contemporary, hip-hop moves and, as a result, are not only incredibly fun to attempt but also a much more physical workout. And, believe it or not, this mom scores better on those current songs than the classics, although I am still outperformed by my children.

In order for the workout to be most effective, I choose “non-stop shuffle” for a specific amount of time (thirty minutes for me) in order to eliminate the extra time it takes to select songs of my own preference. Furthermore, I am able to choose a shuffle with songs only from Disney Classics, only from the Disney Channel, or a mixture of both.

Since starting back to homeschool after the holiday break, my sons beg to play Just Dance Disney party for our physical education classes. On cold days when we are forced to exercise inside, this party game has been a great alternative to Wii Fit. We often put together a playlist of some of our favorite songs, which always include “Hoedown Throwndown”, “Squirrels in my Pants”, “Shake it Up”, and “Calling all the Monsters”.

My kids are able to hit many of the moves while also singing the lyrics on the screen and watching their points add up. The best I can do is watch that golden hand which indicates how I should hold my remote and hopefully move my own hand and the rest of my body as indicated.

Still, I am a mom; I can multitask. I work out rigorously, have fun with my kids, and enjoy terrific Disney entertainment – all at the same time! 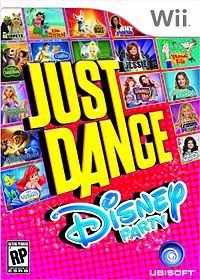