Today I was supposed to go horseback riding, however I was not feeling well so I  decided to try to sleep in.  My roommate headed off for the ride and sleep was beckoning, however it was not to be.  This is a place where things  start early, and people are out and about, and finally at 9am I gave up and  pulled myself together as I felt like I was messing up the housekeeper’s schedule as I was in the room.  I missed breakfast and didn’t find any coffee  anywhere–nor did I ask–so I worked for a while.  Finally people came in  from their morning activities of hiking, fly fishing and riding, and lunch was served.
Lunch was great–and the chef here is wonderful!   Portions are quite generous, and no one should go hungry.  I had a kobe  beef burger for lunch and dessert was a carrot cake cupcake with divine cream  cheese frosting.  It was delicious. 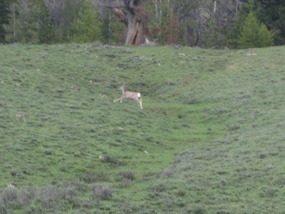 After lunch I waited in the  lobby to see if the afternoon ride would go on as scheduled.  There were some weather issues at the lower elevations (it was snowing up here  for a while) and they wouldn’t take us riding if it was raining.  Finally  the manager made the call that there would not be any riding because of safety  for the horses, and the riders.  Although I was disappointed that I didn’t  ride, the bigger picture is the safety aspect.
In lieu of riding  he offerred to take us on a hike–at a lower elevation because there’s just so  much snow up here.  We headed down to about 8000 feet to another mountain  and parked, and started walking up.  Most of us were huffing and puffing  because of the altitude.  It really wasn’t a steep incline, but we were  feeling the thinner air.  We saw mule deer and elk, and I really wanted to  see a bear.  Our guide did bring bear spray, but alas, no bear.  After  about an hour we headed back to the van and went back to the lodge.

Pine Cone and  Bluebell
There was a bit of time before dinner so I decided to go outside and take some  photos.  As I walked towards the lake I saw a patch of grass, and then I  realized that there’s four feet of snow, and its melting (which is why I saw the  grass) and right at that point I crashed through.  Ended up in snow almost  waist deep, and unfortunately I had quite a bit of work to do to get to an area  which would support me.  It was a lot of effort to get out of all that snow, but I made it–however I was  wet from the waist down.  Headed back to the room and found the laundry,  and threw in a load as I didn’t want to return home with wet  clothes.
Dinner was a short time after I came in, and again it was  another delicious meal.  This was the “Farewell Dinner”.  Dessert was  served in the lobby, and then we were told to go back to the dining room for a  photo presentation/slide show by our guides.  It was a nice time.   Then back to the lobby for board games (my friends played Clue, but I just  watched for a bit.)  I decided to go back to my room and pack as I’m trying  to stay under 50 pounds or I would pay overweight luggage fees with the  airline.  Was in bed by midnight.