Today I am going to take you on some more of our wanderings of the island.   Without any definite plan other than some advice from our Aunt and a map, we decided to go wandering.   We headed east from Honolulu right through the mountains.    The mountains are green, so many different shades of green, it was just beautiful driving through.    We decided to stop at the Pali Lookout.   In addition to being a gorgeous look out, and a favorite spot for tour buses, there were plaques for two important events in Hawaii’s history that we found.   One discusses the Battle of Nu’Uanu Pali, which took place in 1795.  One of the leaders from the big island wanted to unite all the islands under one king, in the end the invaders won by pushing the local’s over the cliff at Pali.   The other discussed a plane of US Air Corps soldiers that perished on April 5, 1942 in service to their country.  They crashed their B-17 Flying Fortress within 300 yard of Pali lookout during bad weather.  The pictures cannot do it justice, but below are some of my favorites, then we will continue on our adventure. 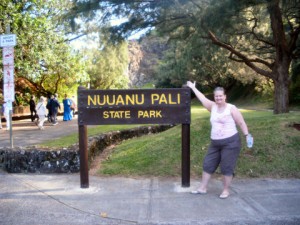 Another place that we stopped at on our drive around was Makapu’u Point, on the southeast corner of the island.   Some locals shared their binoculars with us and we were able to spot some whales, a mom and a calf swimming out in the ocean.  It was very fun to look for them by their spouts of water shooting up.   Another interesting thing we observed here was people doing a water sport that was new to me, stand up paddle boarding.   From what we could see you stand on a surf board type board, and paddle yourself around in the water.   Some of the people were quite a ways out in Waimanaio Bay.

We continued along the ocean and drove past Hanauam Bay Nature Preserve, this is supposed to be an excellent place to snorkel.

The locals we had met at Makapu’u Point suggested the next stop to us, and I think it was Niu Peninsula.    From the road this looks like a lookout parking lot, but was quite busy and we had to circle several times to find a spot to park.  We were also looking for whales here but did not spot any.  We did however see a small beach area next to the lookout that looked like fun and explained why the parking lot was so full.

Ready to get more information or to book your Universal Orlando vacation? Learn More.
Tags:Hawaii, Oahu